It’s been quite an offseason as both divisions in this conference have found ways to re-tool and rebuild on the fly. With Alex Ovechkin announcing a possible retirement in 2021 and the Columbus Blue Jackets’ roster makeover, the 2019-2020 eastern conference could have some new faces who stand out during the playoffs. Although the Boston Bruins didn’t win in the cup finals this past spring, they should be good enough to get back into the playoffs, barring injuries. It’s time to predict the eight teams that have the best chances of making the playoffs in this conference.

Unless injuries take their toll and everything falls apart, the Lightning, Bruins and Leafs stand out as the heavy playoff favorites in this division. Detroit, Ottawa and Buffalo just don’t have enough firepower to make it, and could possibly be the worst teams in the league…again. Tampa Bay, Boston and Toronto all are blessed with depth and stars who know how to pass, score and win in the regular season. As for Montreal and Florida, it’s heads or tails; heads being solidly getting in or tails barely missing out. Florida added a top tier goalie in Sergei Bobrovsky along with new coach Joel Quenneville. These top two additions give Florida an edge to possibly snatch the sixth seed (at least).

The first two teams listed have made the playoffs, consistently ranking as a top seed. Though there’s skepticism on how the Caps and Pens will fare in the playoffs this upcoming season, they seem poised to return strong and could take the top two spots in the Metropolitan. The rest of the division though is filled with questions. Could the Islanders and Hurricanes replicate the magic they had last season? Both rosters have a lot of questions which could take them a while to figure out. Are the New York Rangers ready to make the next step and return to the playoffs? The addition of hot handed scorer Artemi Panarin sure helps, but will Alexandar Georgiev prove he’s ready for the big stage? How will the Columbus Blue Jackets re-group since most of their roster was poached in free agency?

The two teams that seem to have answered most of their questions seem to be the latter picks, the Devils and the Flyers. The media has questioned and ridiculed the Flyers for…<fill in any reason here> It seems “nothing” they do can be right. Ironic, considering their new coach Alain Vigneault has been to a Stanley Cup Finals with a roster who’s best player was a goaltender. Carter Hart could continue to blossom into a top netminder if he takes the next step this season, and depth has to be something that continues at the same pace if not better. If this team can stay healthy, playoffs and even top three in the division is a possibility.

As for New Jersey, the addition of P.K. Subban this past offseason and drafting Jack Hughes at number one overall makes the Devils a serious playoff contender, even if they’re the seventh or eighth seed. Taylor Hall and company should be back to healthy again (a good amount of the roster was injured last year in a competitive division) and Cory Schneider should be able to get more playing time as the starter. There are a lot of tempting looks this team can give, and there’s more that can be answered here than with a team like the Islanders or the Rangers. While they probably won’t be the top team in the Metropolitan, there’s a good chance they could force the hands of the teams that are serious about going into the postseason.

The Devils traded for PK Subban to add depth and defense. 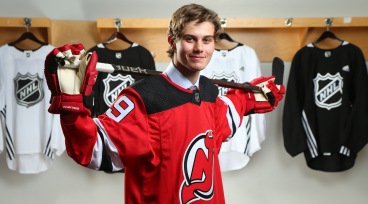 First overall pick Jack Hughes could immediately make an impact for the Devils this season, as he’s hailed as the next Conor McDavid.